Bourbon and Beyond Day 3 Nip

Bourbon and Beyond Day 2 Quickie

Here are a few images from Day 1 of Bourbon and Beyond to get you in the mood for more articles and an interview or two in the coming days.

Bourbon and Beyond Teaser 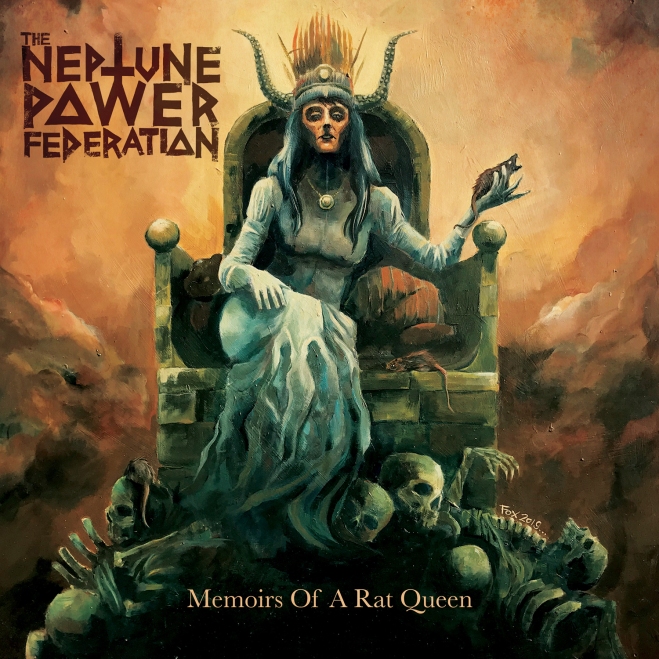 I have really been out of the loop on The Neptune Power Federation. From Australia, the band members are a colorful collection of personalities. To wit: Imperial Priestess Screaming Loz Sutch – Vocals; Inverted Crucifox – Guitar; Search and DesTroy – Guitar; Jaytanic Ritual – Bass; and Mr. Styx – Drums. Despite the over-the-top stage names, the band’s sound is not a gimmick. The music is often described by reviewers and in press releases as space rock and metal. OK, sure. I’d say mainly it is catchy guitar-based rock and roll that lands on the heavy side, with numerous (too many to count) theatrical splashes. It reminds me a little of The Voluptuous Horror of Karen Black, except with a lot more variety. Also maybe a sinister hybrid of Blue Öyster Cult and Judas Priest. One of the most unique characteristics of the band’s music is the large number of sharp changes in the songs. They keep you guessing, and thereby interested.

This is how side one struck me after two listens. A snappy radio anthem “Can You Dig?” starts the set off with a spacey whurr. Next is the melodic beginning of “Watch Our Masters Bleed” that turns into a grinding guitar saw before rolling hooky into a pop metal valentine. “Flying Incendiary Club for Subjugating Humans” throws out great guitar licks to complement what might be a mission statement. “Rat Queen” has a de-synched dual vocal that is positively flabbergasting. It takes a hard left turn three minutes in with a transition of musical theater cowboy clicks that somehow lands in between squealing lead guitar and harmonica. Then the tempo changes. It is hard to keep up. And that’s just the first half.

Memoirs of a Rat Queen is available starting September 20 in full, but you can see a video of “Watch Our Masters Bleed” on YouTube now, and also a couple of live performance videos. Check them out. The music is solid and different. I have my fingers crossed for a US tour so I can see them live. Recommended.

Doom Metal keeps expanding at what seems like an exponential rate. It is a little puzzling, but trends are never easy to predict. Maybe it is the stoner angle so much of doom relies on – it caught a wave on the edges of the ever-widening decriminalization of cannabis products at the state level in the US. Or maybe it is just that there is a lot of grey area with crossover potential so the fan base is expanding like slowly rising waters in a gradual flood. Whatever it is, there are more doom bands than ever now, and that’s good for me because I am a doom fan.

One band to keep an eye on is Void King, who have a new release called Barren Dominion blowing in on a dark wind from the Midwest. Contemplative, buzzy, and riffy, the eight songs have a consistent structure of rising from quiet to urging persistent percussion and then heavy drops the doom. Jason Kindred’s vocals put me in mind of Tony Martin’s performance on The Eternal Idol with echoes of Danzig laced in there as well. The effect is impressive, and vocals pile on to the other instruments in creating a big sound that fills all the corners of your head. This new one is the band’s second release, and it is a step up in song writing and performance that signals an expanding future. It is difficult to stand out in the doom field because there are so many bands, perhaps necessarily, that have a similar sound. It is therefore difficult to produce something memorable like Barren Dominion.

If you can catch Void King live, that’s the way to go. Their next gig is in Indy on September 14 at Black Circle Brewing – it is the release show for Barren Dominion and it will be a great way to spend your Saturday night.

I saw Tool live for the first time in a decade last May in Florida at the Welcome to Rockville festival. They played two songs from the then-unreleased album, Fear Inoculum, “Descending” and “Invincible.” The crowd was taken in, me too, and I wondered again on the spot (and yet again right now) how Tool can play such complex music and still have incredibly widespread fan support. They do, and no mistake, as I saw when thousands of people stood with me on that Sunday night in the Jaguars Stadium parking lot and listened to 15-minute-long songs at the end of three days in the sun. Over the years their music is getting more complex, the songs are getting longer, and the fans are still there. And not boutique fans, either – metal fans, the same fans who listened to Judas Priest and Rob Zombie the day before. Tool is a fixture in heavy music and their fans have been clamoring for a new album.

Puts me in a Pink Floyd state of mind a little bit, this new one does. It is more of a Tool structure with Pink Floyd shading than the other way around. To see whether having the Floyd thought was crazy or not, I listened to the other Tool releases to suss out similar refrains and flavors – do they have the same feeling? The new one owes a lot to 10,000 Days, which I see as a bridge between Lateralus and Fear Inoculum. Makes, sense, right? It is a progression, one album to the next. It is a trajectory. The early music to me was mournful, then it turned toward rage and after that … well, if not understanding, maybe the beginning of acceptance. What is it now? What does the percussion and the synthetics and the guitars add up to now? No one word really seems right, but it is knowledge and wisdom and experience that the band has combined into the next step of what it is. That either makes sense or it doesn’t. And you know what? Forget about Pink Floyd. This is all Tool. It is a mesmerizing and menacing meditation punctuated with crisp percussion and aggressive guitars, bound together by prophetic, even Stygian, vocals. So, in other words, I like it a lot.

This is the kind of new release fans want from older bands – truly new music that is just as clever and inventive and good as the songs we already know. There are six songs here longer than ten minutes each, along with a few connective musical tissues. None of it is bloated or overlong or unnecessary. It is a major musical accomplishment. The end.