Last weekend, Metro travelers in Montreal stopping at Parc Jean-Drapeau were greeted by the gates to Heavy Montreal, Canada’s premier rock festival. The construction that stirred up things last year was long gone this time, and the festival grounds were over-run by fans enjoying two beautiful hot summer days and four stages of music. The setting was ideal, being in a park on an island in the St. Lawrence River between Montreal and Longueuil, easily approachable from either side and offering an impressive view of the city across the water.

The lineups on the four stages sometimes seemed to have a theme (see the previous post for a full set time schedule). For example, the Summer Slaughter Tour made a stop at Heavy Montreal, and all the bands played on the same stage, one after the other, on Saturday. It was an excellent way to catch that tour if you couldn’t make one of its other stops. Steel Panther and Quiet Riot played on the same stage, while Watain, Harm’s Way, and Municipal Waste played on a different one. With four stages, the organizers had two bands playing at all times far enough apart to not interfere with each other’s sound, and while the other two stages were being changed over for the next act. There were no lulls at all.
The headliners were Ghost on Saturday and Slayer on Sunday. These bands have legions of fans, as do strong second line operators Anthrax, In This Moment, Godsmack, Clutch, Evanesence, Slash, and Dying Fetus. For the most part, these bands did not overlap, the exception being that Dying Fetus played at the same time as Ghost – although I would believe it if somebody told me that diehard fans for either of these acts are unlikely to be diehard fans for the other so there was limited damage. There are always a couple of tough choices in a festival with lots of bands you want to see, so I comfort myself with the certain knowledge that if you stayed to hear a band’s entire set instead of wandering off to another stage then you had a great time. 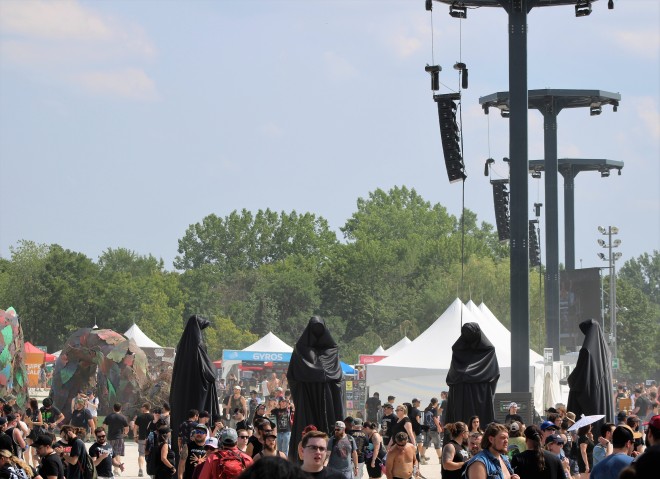 There are more posts coming this week about the festival, so for now I will just mention two of my favorite performances of the weekend: Clutch and Dopethrone. Clutch played with their customary laid back enthusiasm, opening with “Ghoul Wrangler” and passing through one crowd pleaser after another. The band stuck mostly to their newer albums, Book of Bad Decisions and Psychic Warfare, but did dip into the classic well of Blast Tyrant and, I’ll say of course, “Earth Rocker.” I have seen Clutch a dozen times in the past two or three years, and the set is always different. They

have so many songs their fans recognize and love to hear that, whether they play six songs or sixteen, it is always a high adrenaline experience. I never get tired of Clutch – I always look forward to seeing them again. On the other hand, I had never seen Dopethrone perform before so I did not know what to expect. I have always thought of their music as particularly violent, drug-dripping doom. The band does not have any US dates scheduled this year so Heavy Montreal was my only chance to catch them. Their performance was like an interstellar shriek of wailing guitars and coarse vocal emanations. They

seemed to vibrate on the verge of explosion. After just one set Dopethrone has made my list of bands I’ll go out of my way to see whenever I can.
For me, Heavy Montreal is a must every year on the festival circuit. There are always a few bands playing there that do not show up at other events and so it is often the only way to see them in the festival setting. The organizers keep prices low compared to other competing festivals (this is especially true for people coming in from the US given the current exchange rate of US$0.76 = C$1.00), but there is no skimping on the presentation of the music or on the festival grounds. There are more hydration stations with free water than any other festival I have ever been to and there is the occasional pleasant surprise like giving away sunscreen for free this year. Heavy Montreal is always a good time and this year is a shining example of that tradition.